Unforgettable Jewelry Looks from the 2013 Oscars 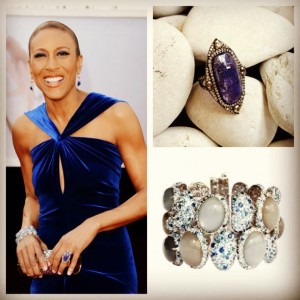 The Oscars bring together Hollywood’s elite for an unforgettable evening honoring the best movies of the year. The biggest celebs on the planet arrive at Academy Awards, wearing custom-designed couture gowns and stunning million-dollar jewels that leave us breathless.

Embellished and brightly colored gowns in classic silhouettes have been the go to looks for many celebrity actresses. It’s no wonder these A-list ladies chose TACORI jewelry to compliment their gowns. TACORI’s designs are both elegant and modern, making their red carpet look simply picture perfect.

The excitement of the past few months has led up to the most-anticipated night in Hollywood: the 84th Annual Academy Awards. As the red carpet is being rolled out, we can’t wait to see the fabulous jewelry celebrities will wear on Sunday night.

In the meantime, let’s recap our favorite TACORI red carpet moments from the 2012 awards season.

English actress Carey Mulligan accessorized her dress perfectly with a pair of TACORI Prasiolite and 18k gold studs. Small earrings look great when paired with an intricate neckline, such as Carey’s.

Nominee Tia Mowry looked stunning at the People’s Choice Awards in TACORI’s tassel diamond earrings. The sparkle really played up the sheen of her gown.

Stay tuned for the Oscars night!

Congratulations to Drew Barrymore and her fiance Drew Kopelman who were just engaged during a 10-day stay in Sun Valley, Idaho. I’m happy for them, but I’m actually congratulating them on their ring choice!  It is a unique, lovely setting and a simply perfect diamond color and cut. Drew’s engagement ring features a colorless (D color) radiant-cut diamond that is just under 4 carats on a diamond-covered band. Want to learn about the look and the diamond?

We are excited to see Tacori everywhere this season. From the red carpet to web and beyond, the brand is blooming even before the flowers !  Brides in Flemington & Bridgewater, NJ have been sizing up, too, in preparation for Spring nuptials and we have celebrated Anniversaries galore this year Married couples ring of choice: Tacori, of course. Read on for more from Tacori…. Stylish and playful, with color-filled gemstones and unique details, the Tacori 18k925 Collection is an elegant, modern take on iconic glamour.  See which celebrities and magazines have already cracked open the jewel box to play dress up with these unique designs.

The 18k925 name refers to the sleek metal combination of 18k gold and .925 silver that characterize these pieces, making each design bold, significant and special.  Diamonds, colorful gemstones, exquisite quartz and creative doublets set this collection apart from any other.  Tacori’s signature crescent motif of half-moon arcs are elegantly incorporated into virtually all of the 18k925 designs, accompanied by the golden “gem seal” for the extra Tacori touch.

We’ve been watching Carrie Bradshaw’s jewelry style for many years. In Sex and the City 2, when Big captures her heart in a final scene of the film, he presents the NYC diva with an eye-popping 5 carat black diamond ring and tells her “because you are not like anyone else.” This is where movie-goers reach for the tissues.  But, who could take their eyes off that rock?! The buzz is already swirling about the scene with what is arguably the most significant piece of jewelry in the movie’s entirety: a 5 carat black diamond ring set in 18K white gold surrounded by 80 round natural white pave diamonds equaling 0.35 carats by designer Itay Malkin.

A bit of bling, but countless classics–Jewelry at the Oscars!

The red carpet is the best part of the Oscars for most of us. In fact, the Oscar fashion trends set the stage for what we will be seeing in magazines and the stores for the next year!

As jewelers, we pay attention! We need to know what our fashion-forward customers are going to come looking for and we do not want to disappoint them. So here are a few of our notes from the 82nd Oscars.

The jewelry worn at the Oscarsâ€”with the exception of a few ladies who opted for chandelier earringsâ€”was overall, classic diamond jewelry. From simple studs to drops to cluster versions, many stars wore diamond earrings along with a matching diamond bracelet. Take our big winners, and my favorite, Sandra Bullock. She wore her own diamond earrings and matching bracelet (this is a big deal considering almost all of the others borrow from the top designers).  Director, Kathryn Bigelow, paired diamond stud earrings with a matching pear-cut and round pave diamond bracelet.

The yellow diamond trend also continued with Best Supporting Actress Mo’Nique, who selected a princess-cut yellow diamond tennis bracelet, radiant-cut light yellow diamond line bracelet and radiant-cut fancy yellow and colorless diamond earrings to wear with her sapphire blue gown. Kate Winslet wore a yellow diamond necklace created exclusively for her by Tiffany, but we have a similar one right here at Roman Jewelers! Yellow diamonds are classy, rare, and a true statement about a personality. We love them here.

The best part is that these looks are really easy for consumers to emulate and accessorize with their own everyday and night-out looks because diamond jewelry goes with everything! Pull out some of your own diamond treasures, come in to Roman Jewelers and get them polished or refashioned. While you’re here you can see the new latest diamond looks, too! Most of allâ€¦enjoy your diamond jewelry. It is fashionable and smart. New Gregg Ruth pieces have arrived!  Known for his fusion of a unique style of diamond settings and big bold pieces, this ring (left), brings both together more powerfully than I have seen in a VERY long time. Unlike other pieces with shared settings, this piece takes the whole concept to the next level. Stones of different sizes sit together to create a completely full diamond look that is breathtaking in both its design a presence on the finger. A definite show stopper.

In addition to the huge look at the center of the ring, this bold design is flanked by precision set diamonds that complete the ring as a truly BOLD presentation of diamonds. Call now for an appointment, or walk in while this piece is still in our Gregg Ruth showcase. From Roberto Coin comes the long tradition of implanting a hidden ruby, “The King of Gems,” into each piece that the company creates.

Tradition has it that the ruby has the power to bring piece, to promote a long and happy life, to banish evil and to reconcile disputes. That’s a very powerful incentive to want the stone in direct contact with the skin.

Thus the ruby has become the mark of of each Roberto coin jewel – and a secret gift of good wishes to every woman who wears one of a Roberto Coin’s exclusive creations.

Do you prefer the jewelry looks from the golden days of Hollywood or the new, forward-thinking jewelry fashions of the Trendsetter crowd? At the recent Golden Globe awards, viewers saw both.

Sandra Bullock was the big star of the night, winning best actress in a drama for her role in The Blind Side (for which her character was quite a jewelry trend setter, too). Sandra wore a beautiful purple gown and paired it with gray diamond earrings, weighing 40 carets! Colored diamonds have been emerging in fashion more every year, with yellow fancy colored, champagne, and now gray. There was a time when these diamonds were considered unacceptable to even enter the market, but now, thanks to designers and fashion icons like Sandra Bullock, the exposure to the beauty of colored diamonds has grown and become appreciated.

Drew Barrymore also went for a modern diamond look with 20-carat diamond stud earrings and a diamond and moonstone ring, 80 carats. She won the best actress award for the best movie or miniseries.

You know the saying — diamonds are still a girl’s best friend no matter the color, shape or size.

Another notable contribution Chloe Sevigny’s marquis-shaped diamond ring in yellow gold! In a sea of white metal, the yellow gold stood out and made a beautiful statement. Marco Bicego is a designer with plenty of fashionable yellow gold designs and much more affordable prices.

And let’s not totally forget the men. Among them, jeweled cuff links abounded. True Blood actor Ryan Kwanten walked the red carpet in a pair of 7.65-carat natural rough diamond cuff links! For the men that like the look but don’t want to mortgage their homes, cuff-link options especially from Scott Kay are affordable and fashionable and will make any guy more fashionable.

Bring the Bling on! Watch out for this new trend. Actually, it is not as new as you may think it is.
Combining jeans with sparkling gems is something we, women, do so instinctively.

Gems and sparkling crystals are everywhere; on purses, t-shirts, and jeans.

Let the jewelry on the model you see inspire you! Put it on, wear it all with pride and joy.
Layer your jewelry, put gems on the straps of your bags, bangles, and create a bold new look. What are two of the most important accessories for a woman of style? One would be a great handbag, and another is a fine timepiece on her wrist. The handbag needs to be beautiful, functional and an expression of the woman herself.  A woman’s watch has the same requirements. It needs to speak for her in a way that is hers alone. Whether it is steel, gold or platinum, with or without diamonds, it can say the wearer is casual chic, elegantly dressy or somewhere in between. And, of course, if she is like most women, she’ll want more than one! After all, women have many moods! Speaking about classics – hoop earrings make a truly glamorous classic fashion statement. And celebrities are not shy about spotlighting their hoops with every step they make along the red carpet.

No matter where the fashion world takes us, hoops are here to stay. Whether simple gold hoops or inside-out hoops with diamonds all the way around, hoop earrings are versatile enough to be worn with any almost any outfit for any occasion.

The Test of Time My favorite dress is a classic black cocktail dress for special occasions. My everyday favorite outfit is a timeless cashmere twin set. I love both because this type of clothing is versatile and easy to dress up or down, depending on the occasion.

For the ultimate in versatility, however, we look to jewelry to give our clothes a completely different look.  Just put on a diamond necklace, and your basic cashmere twin set sparkles too, and you are ready for a night out.  Add polish to a denim outfit by wearing a distinctive gold necklace and a pair of gold earrings.  A pearl necklace adds elegance to a silk or cashmere dress, and even a business suit.

Classic jewelry, just like a little black dress, will withstand the test of time.