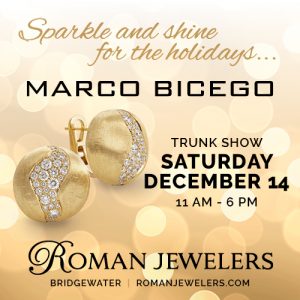 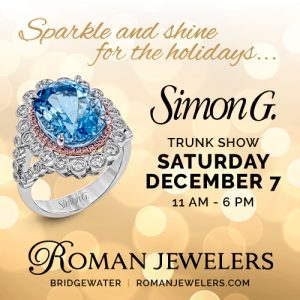 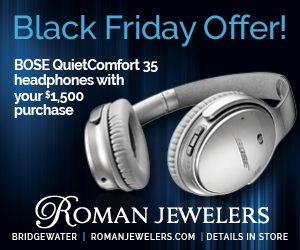 Diamond Engagement Rings: Styles, Varieties, and Options for You 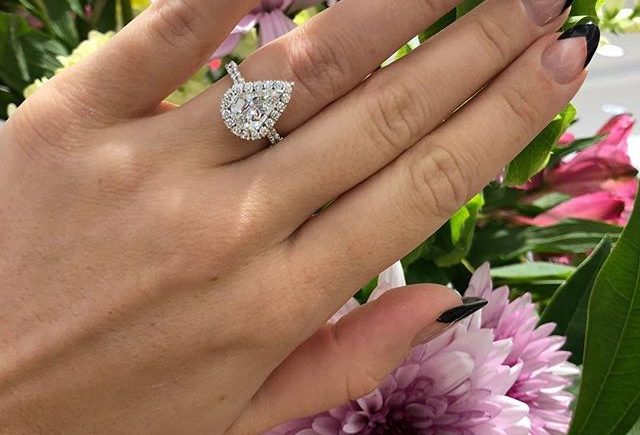 It has been very cleverly said that diamonds are forever and for starting a new relation that transcends forever, diamonds are indeed the best option.

Another reason that contributes to the immense popularity of diamonds is the fact that compared to all the other gems stone that are available in the market, diamonds have an extra ordinary shimmer that can barely be matched by any other stone. Further diamonds are also extremely strong and does not tarnish over time so for pieces such as a wedding ring that you are never supposed to take off, diamonds make the best choice.

Custom Design Weekend…just in time for the Holidays 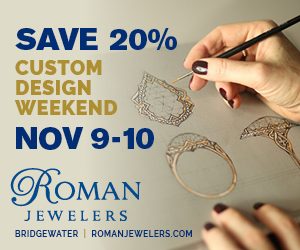 The answer to finding that magical, memorable, one-of-a-kind holiday gift can be found at Roman Jewelers Custom Design Weekend event November 9 – 10. Bring your dreams to life from scratch or refresh a family heirloom. Custom jewelry is a gift that will touch the heart this holiday like no other.

Work one-on-one with our designers to create something as unique and special as your loved one.  Appointments are encouraged and can be made at Schedule an Appointment or by calling (908) 575.1242.

Roman Jewelers “Shares their Heart” with Local Nonprofit Organizations and Together Raises nearly $5,000.00

There is always a charity that is close to someone’s heart. At Roman Jewelers, we felt creating a custom-designed pendant was the perfect way to reach out to local charities and the community with a broader message: WEAR, SHARE, CARE—Wear the pendant, Share the story of your favorite charity, Care and support our local community. And, in the last year, we have done just that by together raising nearly $5,000.

Roman Jewelers is hosting the MY LAGOS MY WAY event October 5th from 11 am – 5 pm. This year, the show features Smart Caviar, the first fine jewelry bracelet for your Apple Watch™ as well as an exclusive look at the Fall 2019 collections.  Refreshments will be served and Lagos stylists will be there providing tips. Our customers love Lagos, designed by master jeweler, Steven Lagos using classic techniques to create enduring and sophisticated styles in both sterling silver and gold. Appointments are not required, but can be made here.

On Thursday, August 29th, Roman Jewelers celebrated their 30th Anniversary at the Somerset Patriots Ballpark in the best way possible—with the community. In honor of their anniversary, the owners, Roman and Sophie Shor and their daughter, Lucy Zimmerman also made a $5,000 donation to the Somerset Patriots Children’s Educational & Sportsmanship Fund from Roman Jewelers.

Their longevity of Roman Jewelers is due to their dedication to providing exemplary customer care and services, including custom jewelry design. Roman Jewelers also prides themselves in carrying only the finest selections of diamonds and jewelry brands, including Rolex watches.

Roman Jeweler’s business began in 1980 when the family immigrated from the former Soviet Union. Roman worked from his basement as a bench jeweler until 1989, when his hard work paid off and he was able to open the first store in Flemington. The business later expanded to the Bridgewater Commons Mall, where they were located for 17 years.

Currently located at 500 Commons way in Bridgewater, the business is managed by 4th generation jeweler, Lucy Zimmerman. And, while the family keeps busy running their store, they have always made an effort to give back to the community that has, as Mrs. Zimmerman says,“…graciously given us so much.” In this spirit and to celebrate their 30th Anniversary, Roman Jewelers also sponsored the Somerset Patriots 2019 Bat Kid program with the Somerset Patriots and had the wonderful opportunity to meet so many local kids and families.

The Shor and Zimmerman family is proud of their business and proud of their community. It stems from the gratitude the young immigrant family felt when they met a community that embraced them and provided the freedom they longed for. “Thank you to all for 30 wonderful years…we look forward to many more and hope to continue to support our local charities and spread the message of generosity and positivity” said Mrs. Zimmerman. Click for more information about the Somerset Patriots Children’s Educational and sportsmanship Foundation. 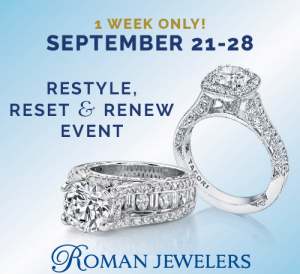 Ladies, you still love him….so why not love your engagement ring, too? Roman Jewelers is hosting the annual Ring Restyle event —ONE WEEK ONLY September 21st  to the 28th. Reset your diamond for an UPDATED look …or UPGRADE! There’s hundreds of rings to choose from…many 20% off. Or design your own. Financing IS available, so it’s TRULY the best time to start loving your ring again! Make an appointment 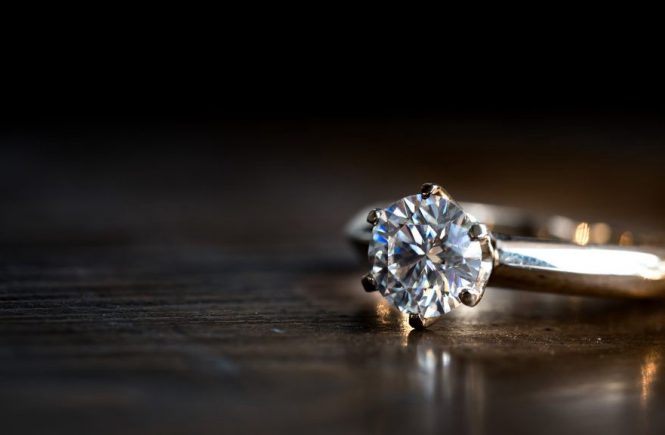 When a couple purchases an engagement ring from Roman Jewelers it is our goal that that becomes the first step in our relationship. In addition to checking your ring.

Roman Jewelers knows that you can choose to buy your engagement ring anywhere, including the internet. So why choose us? Buying your diamond and engagement ring should be a personal, enjoyable and memorable experience that can only be achieved with a one-on-one consultation with diamond expert from Roman Jewelers. During this consultation, you will see your diamond under a microscope and understand what makes it special…just like your love. We are committed to continuing our relationship with you for the life of your ring and provide value-added services that truly do “add up,” including: 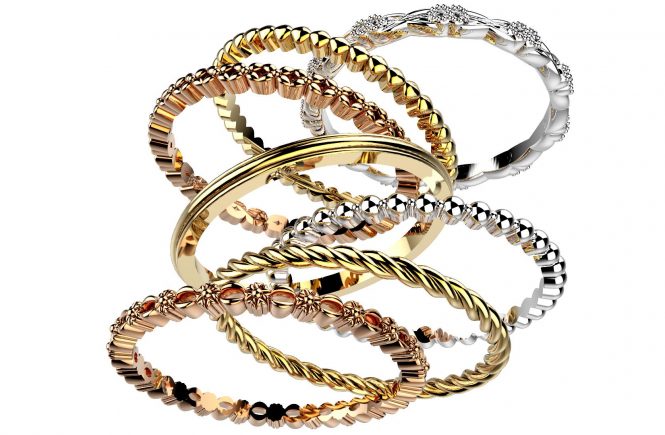 With Summer weddings in full swing and Fall Weddings on the horizon, now is the best time to buy your wedding bands. Here are a few things every couple will want to consider:

Meet the Winners of Our Mother’s Day Video Contest 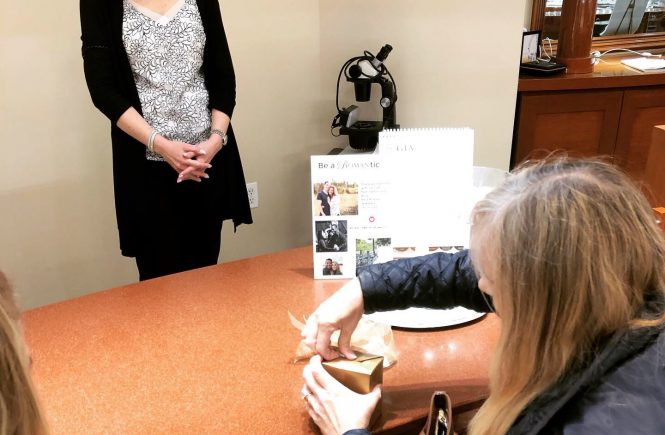 We received some great submissions for our Mother’s Day Video Contest. After viewing so many amazing videos, we selected our winners and presented them with the custom designed pendant that we created especially for this contest. It was an absolute honor to get to know these families and hear all about the wonderful women who raised them. Here are their stories:

For One week only June 22nd till 29th, receive a wedding band with purchase of a wedding band…along with 12 months interest free financing if you qualify and complementary engraving…and wait till you see the selection. June 22nd till the 29th—ONE WEEK ONLY at Roman Jewelers in Bridgewater. (Restrictions apply, see store for details.)