What is an Anniversary Band? 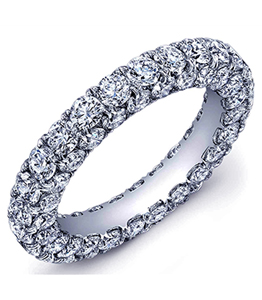 Just what is an "anniversary band"? Is it different from a wedding band?

A wedding band is typically a plain precious metal band, without any stones or diamonds embedded into it. An anniversary band is a little more elaborate; these typically have some type or types of jewels in the band.

An anniversary wedding band is a perfect gift for any anniversary. Whether it is your first, tenth, or fiftieth, an anniversary ring is always appropriate.

There are so many styles to choose from when selecting an anniversary band. Each ring has a unique precious metal band, stone type, stone cut, stone setting, and overall design. Just like no two couples are alike, no two anniversary bands are exactly the same.

Text us for an Appointment
Saved Items (0)
Back

On our website, we use services (including from third-party providers) that help us to improve our online presence. The following categories of cookies are used by us and can be managed in the cookie settings. We need your consent before being able to use these services. Alternatively, you may click to refuse to consent, or access more detailed information and change your preferences before consenting. Your preferences will apply to this website only. You can change your preferences at any time by clearing your browser history/cache or visiting our privacy policy page.

By authorizing third-party services, you allow the placement and the reading of cookies and the use of tracking technologies required to keep our website reliable and secure.

Essential
These cookies are required to run available services and to provide basic shopping functions. These cookies are exempt from consent according to the exceptions provided by the Article 82 of Data Protection Act.
Personalization
These cookies provide a custom experience on our website.
Analytics and statistics
These cookies allow us to measure visitors' traffic. They help allow us to understand which products and actions are more popular than others.

Review and set your consent preferences for each partner below. Expand each partner list item for more information to help make your choice. Some personal data is processed without your consent, but you have the right to object.

You can find out more about which cookies we are using or switch them off in settings.